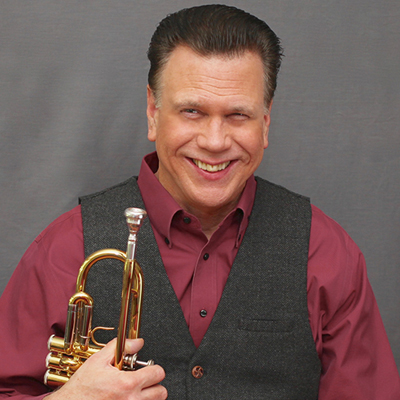 Roger Ingram is a performer, educator, author, designer, and one of the most dominant jazz/lead trumpet players in the music industry. Roger graciously took time out of his schedule to talk with us about his formative years as a musician, what he’s been up to and why he endorses our products.

Tell us about your start as a musician: what led to your decision to choose the trumpet as your primary instrument and who were your first teachers?

My father had a huge record collection. He worked from home, and music was constantly playing at our house. When I was five years old, I used to pick out little melodies on an old marimba we had. When I heard the jazz records my father would play, I tried to copy what I heard on the marimba.

Besides for being a commercial artist, my father (and 2 older brothers) were amateur clarinet and saxophone players. They would all practice together, and sometimes argue about ways to play. I had a strong desire to be a part of the music scene at home and at school, but I wanted to avoid the occasional arguments. So I chose the trumpet. But that’s not the only reason why I decided to play the trumpet. Some of the records that my father played were by Harry James, Louis Prima, Louis Armstrong, and Al Hirt. These were some of the first trumpeters I ever heard. Of all the records my father played, I enjoyed listening to trumpet players the most. Their tone, swing, and improvisations inspired me to play along with their records and try to copy what I heard.

I grew up in Los Angeles. By the time I entered Jr High School, I was doing odd jobs and mowing lawns in my neighborhood. Because of this, I was able to afford trumpet lessons. My first teacher was Laroon Holt. At the time, he was the 2nd trumpet player on the Lawrence Welk weekly television program. Mr Holt put me through all the standard books that any aspiring career trumpet player would need to work out of: Arban, Schlossberg, Clarke, Walter M Smith’s “Top Tones for Trumpeters,” etc.

After a couple years, in addition to studying with Laroon Holt, I began studies with Bobby Shew when I was 14. Bobby Shew was a different type of trumpet teacher. His studies concentrated on listening, swinging, improvisation, breathing, embouchure development, and aperture control and manipulation. He also educated me on the differences in trumpet equipment and mouthpiece design. During my years growing up in Los Angeles, while continuing my studies with both Laroon and Bobby, I also studied with Bud Brisbois, Manny Klein, James Stamp, and saxophonist Don Raffel, who specialized in the art of swing phrasing.

After I graduated high school and started going on the road, during my travels, I had the opportunity to study with William Vacchiano, Mel Broils, Renold Schilke, Carmine Caruso, Roy Stevens, Jerry Callet, and Donald Reinhardt.

Which artists influenced you early on in your music career?

Besides all the music that my father played at our home in Los Angeles, he also took me around to hear many of the great small groups and big bands that would come through LA on tour. In the summer of 1967, he brought me to hear Louis Armstrong perform live on the Tomorrowland Stage at Disneyland.  During those years, he also took me (almost every weekend) to Disneyland where I heard the bands of Duke Ellington, Teddy Buckner, The Firehouse Five +2, Bob Crosby and the Bob-Cats, Count Basie, Woody Herman, Stan Kenton, Harry James, Buddy Rich, and Maynard Ferguson. During these concerts, I was fascinated with all of the great lead trumpet players that I would hear playing with those bands. It was during one of the Woody Herman concerts where I made the decision that playing lead trumpet with a big band is what I wanted to do. I had no idea that years later I would be playing lead trumpet with Woody’s band at the Carnation Plaza: the very place where I first heard his band. But besides all the trumpet players, many other instrumentalists and singers had a big impact on me during my formative years as a developing musician. Most of these artists were heard at home on my father’s records. These include Chu Berry, Sidney Bichet, Tommy Dorsey, Frank Sinatra, June Christy, Pete Fountain, Jimmy Dorsey, Joe Williams, Billie Holiday, and Art Pepper.

You have toured and/or recorded with some of the most tremendous jazz artists of all time. These include Woody Herman, Maynard Ferguson, Quincy Jones, Harry Connick Jr., Ray Charles, Frank Sinatra, Wynton Marsalis and the Lincoln Center Jazz Orchestra. Of everyone with whom you have collaborated, which artists have impacted you the most?

Every one of the artists you mention impacted me in a different and positive way. But as far as lead trumpet playing is concerned, I would have to say my tenure with the Woody Herman Orchestra was the most significant.

As a performer, author, educator and designer, you have presented master classes, concerts and brass clinics throughout the world. Your (highly acclaimed) first book, “Clinical Notes on Trumpet Playing” is recommended reading for music programs worldwide, and your newest book, “The Versatile Trumpeter” is being released this month. What advice do you have for young, upcoming jazz/lead trumpet players?

Versatility is the key. In order to carve out a successful career as a trumpet player, you need to authentically present and perform many styles of music. This increases your chances of employment. In order to do this, young trumpet players must embrace every type of music, whether certain styles are their “cup of tea” or not. Being a good all-around trumpeter will keep you working far more than being a specialist. For instance, knowing how to improvise, and effectively perform with a symphony orchestra, a jazz orchestra, a funk band, a salsa band, and a rock and roll group will keep you employed far more than someone who just plays high notes, and calls himself a high note specialist. With all styles of music, in a nutshell, it pretty much boils down to, “play the right note at the right time, and get along with everybody.” Another way to put it is, “show up, shut up, and play your butt off.”

You were one of the first supporters of the “Robinsons Remedies” product line. Tell us about your experience with Lip Renew and why you recommend our products to your students and colleagues.

We did not come out of the womb with little trumpets. In many ways, we are not supposed to be doing this. Obviously a brass instrument is a man-made object. When mankind appeared, I seriously doubt the blueprint design was intended for our bodies to function as air compressors and for our faces to be in contact with a circular piece of plated brass for hours on end, day in and day out. Personally, my chops rarely feel perfect; however, I can also say that my chops rarely feel terrible. After all these years, I have struck upon a good average, a happy medium. In addition to keeping our bodies well hydrated, getting enough rest, and not overblowing the horn, there are other steps that will help us survive playing a brass instrument, including the use of products made by Robinson Remedies. We need all the help we can get!

Because Robinson Remedies Lip products do not have a wax base, they absorb into the skin quickly. This enables a brass player to apply their products before, during, and after performance. The arnica ingredient is especially helpful in healing. This decreases long term swelling or bruising due to extremely demanding performances or schedules. I have been using Robinson Remedies products for over two years, and they help me maintain a consistent performance average.

To get your copy of “The  Versatile Trumpeter” visit: https://VersatileTrumpeter.com/

To contact Roger for clinics, masterclasses, or performances: http://RogerIngram.com/clinics.php